Largemouth Bass For Your Pond 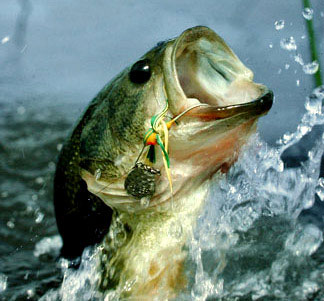 Over the course of the last year or two, you have slowly added forage fish, such as minnows and bluegills into your pond, and you are ready to start adding some of the more aggressive predatory sport fish; Largemouth Bass. Adding Largemouth Bass to your pond, will help keep the ecosystem in check, as they will help control the populations of the much smaller species of fish. Largemouth Bass also give anglers a fish that will be fun to catch throughout the lifecycle of the pond.

When adding Largemouth Bass into your pond, there are measures you should take in preparation. You will need to make sure the pond is stocked with plenty of prey fish, including minnows and either hybrid bluegills or regular bluegills. If these forage fish are not available, and have a good population established in your pond, the Largemouth Bass will fail to thrive and may experience slow growth if any at all. It is recommended to add a few hundred bluegills and ten pounds of minnows per surface acre of water six months to a year prior to adding the Bass. This allows those fish time to get established and start reproducing before adding a predatory fish that could easily wipe out those populations if not carefully managed.

Purchasing from a reputable fish hatchery, such as Kloubec Fisheries, will ensure that you’re receiving healthy and disease-free fish. Kloubec Fisheries offers Largemouth Bass fingerlings in the three to four-inch range. With proper forage and water conditions, your Largemouth Bass can grow rapidly doubling and maybe even tripling in size in just one season. Within two years after initial stocking, you can expect to catch some Largemouth Bass averaging 10-12 inches in length or 1-2#, providing they have an excellent source of food. You should plan to add a few pounds of minnows annually to ensure your Largemouth Bass have plenty of forage available at all times.

Adult Largemouth Bass tend to be solitary, although you may occasionally notice several bass congregating in areas with a large abundance of prey.They are usually the apex predator in their habitat, hiding between rocks, among water vegetation, or under roots or limbs of sunken trees, striking their prey from the shadows. Largemouth Bass prefer quiet, calm and warm water, but can adapt to other conditions.

The adults prefer to feed on small fish like perch, sunfish, and minnows; however, it is not uncommon for them to prey on crayfish, frogs, and insects. In some instances, Largemouth Bass have been known to eat small birds and mammals that find their way into the pond water.Largemouth Bass fry (under two inches) will feed on zooplankton and insect larvae, but as they grow, they become more aggressive predators and will feed on fish of the same size and have even been known to become cannibalistic.

Spawning typically occurs in early spring when the water temperature reaches 54-64 degrees Fahrenheit, but ideal spawning temperature is around 60 degrees. Female Largemouth Bass tend to grow larger than males. Male Largemouth Bass will build a saucer shaped nest in shallow waters for spawning, and will guard the nest until the eggs hatch within four to six days. After the fry hatch they will remain in schools called the brood swarm and they will remain under their father’s protection until they are approximately four weeks old. In areas with enough food and good habitat such as water plants, Largemouth Bass can grow rapidly.

Largemouth Bass will continue to grow throughout their entire life and can live up to 25 years, although the average lifespan is around 16 years. Any Largemouth Bass weighing five lbs. or greater is usually considered by anglers to be a large fish; however, the world record Largemouth Bass was caught in 1932 and weighed 22 lbs. and 4 oz. In 2009 the record was tied with a fish of the same size caught in Japan. Since Largemouth Bass never stop growing, it is safe to assume, the larger the fish the older it is. In small farm or recreation ponds, the Largemouth Bass wouldn’t have many predators, except in cases where Walleye, Muskie, and Northern Pike are prevalent.

Due to light intensity, Largemouth Bass generally are more active in the mornings and early evenings.Early spring is the easiest time to hook a Largemouth Bass, as they will start moving towards the surface, although bass can and will bite year round.